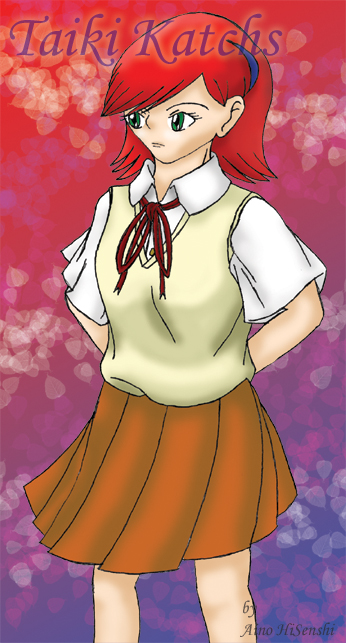 Taiki Katchs is a fourteen year old boy from the heart of Tokyo. A natural redhead, there are many questions as to his lineage and as to where it lies. His blood type is O, and he attends Jusenkyo Junior High. He is a self-proclaimed "Junior Detective", though he has had his hands in many cases, ranging from missing persons and pets to homocide. His natural personality is one with a rather hardened core, but in Yuriba, this heart has been slowly softening.

A History: Taiki is a Girl Now?!

In the night life of Tokyo, there is a mass burglary, and only one fourteen year old redhead seems to be the one on the trails of who committed these crimes, as well as the murder of a beloved old store clerk the neighborhood seemed to really enjoy having. It was by a stroke of luck that he happened to catch sight of the fleeing shadow down the side alleyway near the scene of the crime.

Following the shadow from a distance, he happened upon an unused warehouse. Inside was the head leaders of, what seemed to be, a large crime organization. After hearing that they were, indeed, the ones responsible for the recent crime uproar, he was knocked unconcious by a guard of the gang stationed at the warehouse.

After his discovery, he as bound and gagged, and tossed into the nearby river. till unconcious at this point, he sunk easily to the bottom of the river. Unlike most of his world, the botom where he sunk to was formed to a portal that transported him to another reality. Passing through this portal changed, not only his destiny, but his very body.

Upon awakening, Taiki found 'him' as now a 'her'. With a bit of help from a local island girl, by the name of Mana, the new Taiki found herself as a part of a world unlike her own. Some rather odd twists have added to her condition, and of her own accustomed responses to things, though it is doubtful that things will not solve themselves in time.

Yuriba: An Island Unlike Any Other

At awakening, her binds were cute and she was introduced to the island in part by a young salamandargirl, by the name of Mana. After departing with her, the next few days were spent exploring the island and observing her new surroundings.

As she began to mingle with the populace of the island, she met a young bunnygirl, named Faye. It was her and a catgirl, Tenshi, that began to teach her of the ways of life on the island, and the social norms, as well as much about her new body and self. She has also learned that another girl by the same name vanished from the island just before her arrival, and has taken up the case to attempt to find this other Taiki.

Love and trust are new things to a boy, especially one as hard-worn as young Taiki, as his job entails. But, as of late, she has been finding herself coming to terms with emotions and feelings, as well as the social norms of 'cuddling' and 'snuggling' so popular among the other girls surrounding her. Her adventures on this strange new island, apparantly, have just begun.

Mana - A young salamandargirl that greeted Taiki as se awoke on the island.
Tenshi - Catgirl, and the old Taiki's lover, employing the new detective to find the missing Taiki.
Faye - A young bunnygirl, the perfect anti-angst, and one of Taiki's earliest true friends on the island. Also, the first person to see her naked, aside from herself.

Images of Taiki following are done of Taiki Katchs by various artists, including her player, Aino HiSenshi. 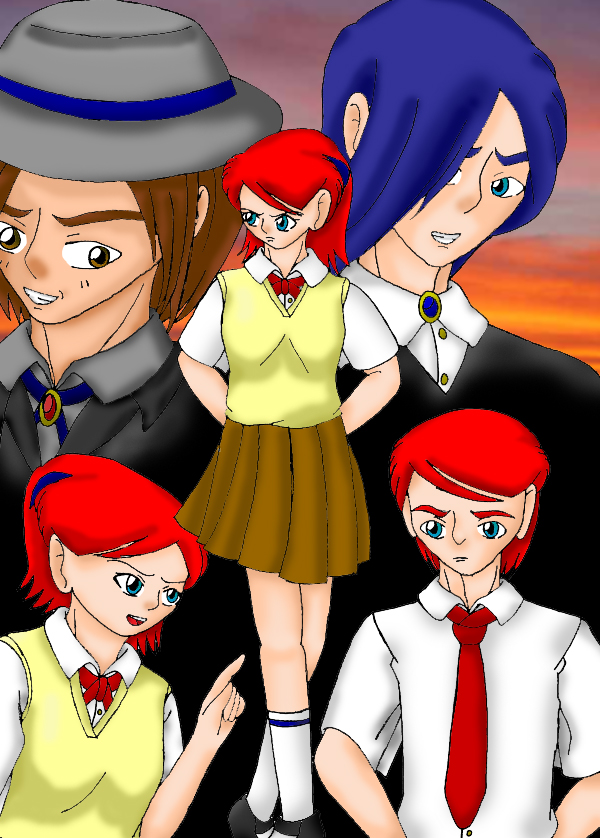