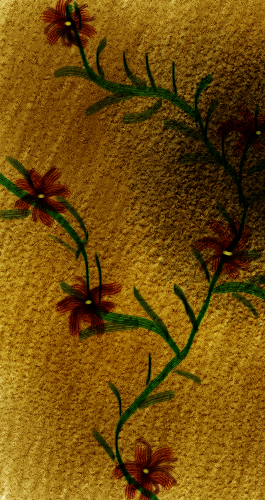 Angstflowers are a flowering vine considered to be a pest or weed among most of Yuriba's botanical community. Capable of growing almost anywhere, it is commonly found in areas of high angst. These plants feed off of the radiated emotional distress from passersby. Much like kudzu, angstflowers are considered a highly invasive plant, and their growth rapidly spirals out of the control if unchecked. In general, any infestations outside of the Aysuna Cliffs are eradicated as soon as discovered.

The appearance of this flower is unmistakable, marked by its spiky leaves and drooping red flowers. It is generally considered to be dangerous to humanoids, as the flower's pollen has been found to exhibit mildly carcinogenic effects. In addition, the plant induces severe vomiting when eaten, making it an effective emetic. Dried and powdered petals and leaves from the plant are sometimes used by local herbalists, doctors, or other medical practitioners for this purpose. This is generally found to be the one redeeming trait of the angstflower.