The most recent census was conducted in October of 2016. Because this is a voluntary participation study, results may be skewed minutely or significantly from the actual numbers. In cases where it is possible, census results will be cross-compared to immigration records.

Rate of Response vs. Overall Population 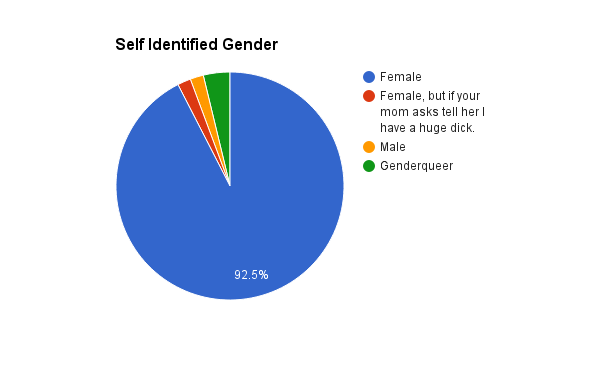 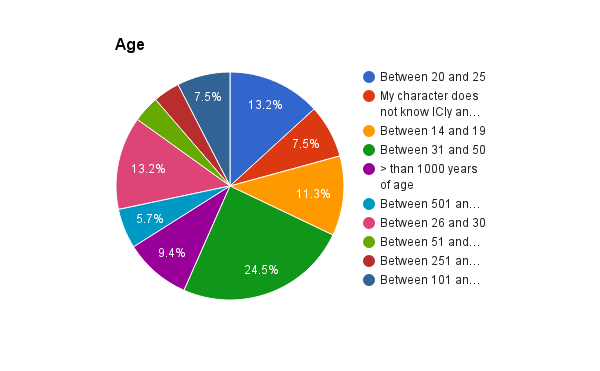 The 'Unknown' category includes both those who did not know their own age, as well as those who did not answer the question. From 2006 on, there was a slight shift from those in their teens to those in their 20s being in the majority, possibly representing the aging of the early immigrant population; by 2014 this age group appears to have slipped into their late 20s and 30s. After 2015, given this aging of the population, it is likely that in future years, the age category over 30 will become more finely granulated.

The majority of Yuriba's population (ranging from a low of 34.3% in 2015 through a high of 71.3% in 2005) is human by birth. Other statistically relevant subgroups include those of mixed demon and human ancestry (generally between 1-3%), kitsune (generally 3-5%, up to almost 10% in 2015), dryads (up to 4% in some years), Faeries (from 1-3%), and cat-humans, also known as 'catgirls' (usually between 3% and 7% of the population). 2011 saw an unusual racial spike in the form of 'Trolls', a specific non-Earth origin race that saw wide-scale immigration that year, making them about 5-6% of reported population.

Evaluated over time, Jusenkyou appears to have risen in popularity overall. Tastes seem to have shifted somewhat from previous years, trending towards a much wider variety of springs in current use. For example, in 2015, only 3 known springs were never selected as having been used. 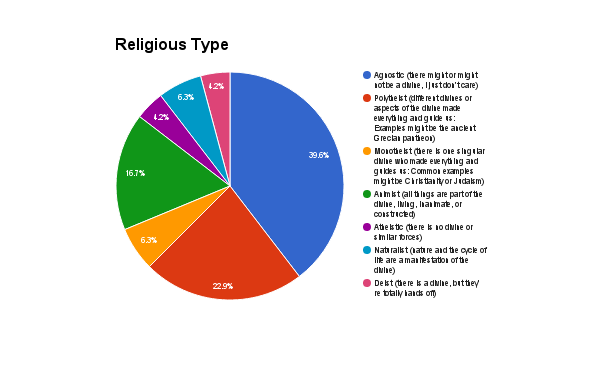 Those that actually did identify as religious ranged widely in their choices, some including devotion to a particular philosophy. The most common religious identification are Christian (generally, very close to 8-10% of the population, although has fallen as low as 3% in 2014), Yuriban Animism (between 2% and 23%, with numbers rising each year), Buddhist (usually a bit short of 5%) and Shinto (approximately 5% of the population). Modern population tends to be about half on the non-religious, atheistic, or agnostic spectrum, with an additional approximately 20% follow animistic or pagan practices.

Outside of these, a wide variety of religions are practiced by singular individuals, often those arising from their homeworlds, while many other residents hold personal or unique religious views. Perhaps the only real trend out of these is a slight lean towards religions or philosophies that include some degree of nature veneration. 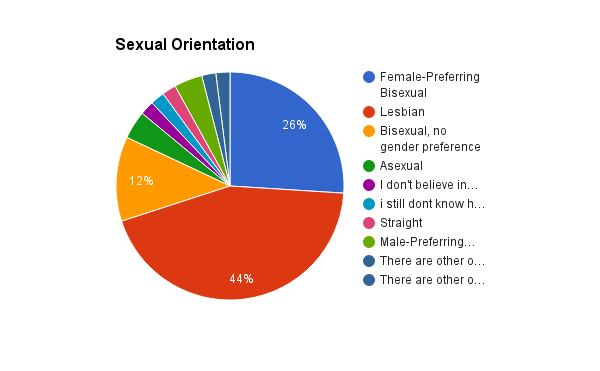 All of those who identified as straight were male, with one exception in 2013/14. Those who identified as Bisexual were assumed to be equally attracted to male and female forms unless they specified otherwise. The No Orientation category is those who stated on the census form that they do not believe in orientations. The N/A category includes those who didn't answer or gave unclear responses and those who refused to identify with a particular orientation in 2005. The list of orientations was expanded significantly in 2006, as can be seen in the above chart.

The last category also includes several individuals who clearly falsely identified as being native Yuriban in 2005, due to the lack of any native populations of their species. Only origins reflecting at least 5% of the population in at least one year are shown, for the sake of size, but the variety of Yuriban origins cover nearly all major countries, many historical periods, and a dizzying array of alternate histories and other worlds. 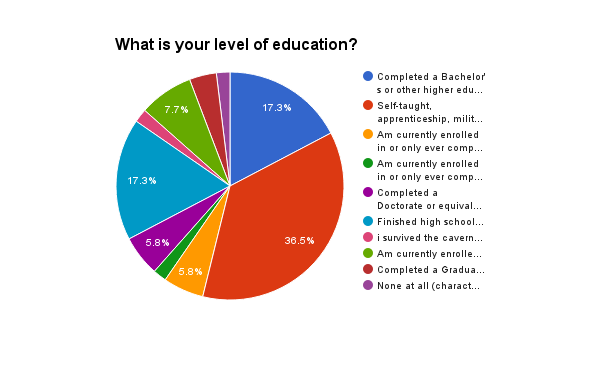 2005: It should be noted that this is a category that many respondents were less than specific in, and the compiler has done their best to place them in what she felt would be the most appropriate category. As such, these numbers likely have a notably larger margin of error.

2006: The system was changed for the school question, yielding a more precise set of answers.

Most Yuriban residents are multilingual, thusly, these numbers will not add up to anywhere near 100%. The official languages of the island are English and Japanese. English is spoken by between 80% and 97% of the population. Japanese is spoken by about one third to one half the population. No other languages quite matched these two in popularity, but other common choices were Spanish (as high as 12% in some years), French (usually between 10-25%), German (5-10%), Chinese (5-10%), Gaelic (approximately 5%), and Hieratic Yuriban (from 5-17%).

Demographics for powers, special abilities, magic, and disabilities was not collected until 2006.

The majority of Yuribans (roughly 75% in most years, including in 2016) did not consider themselves to have any disabilities. Among those that did, most were unique. However, there are a few that show up a bit more often, notably, OCD, a missing eye (almost always the right), blindness, intangible natural forms, anger management, infertility, post traumatic stress disorder, and bi-polar disorder.

While there was some mild confusion as to what a special ability might be, an increasing percentage of the population self-identified as having one (up to a height of 73.7% in 2015) - Making most of them qualify as metahumans of some variety. As with disabilities, many of these were unique to the individual in question, and many of those who stated they had powers declined to specify what they were. However, some trends can be noted; the most commonly seem powers seem to be some form of shape shifting magic (most commonly transformation to a single animal form, or the ability to change minor features of the body), immortality, flight, and having super strength, super speed, or enhanced agility.

In most years, roughly a third of Yuribans identify as magic users. After 2013, the number shot up be closer 50% each year. Styles with statistically significant numbers were Arcane (usually approximated 4%), Divine (2-5%), and Druidic (5-8%). 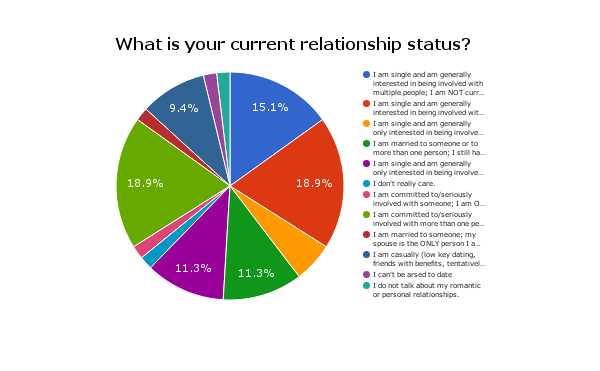 The N/A category includes those who declined to identify their relationship habits.

In 2005, 32.1% of the population self-identified as polyamorous and 25.4% as monogamous. Single persons were not asked to identify as either, and could potentially be members of either category; for the sake of the chart, they have been split equally between the two possible demographics. 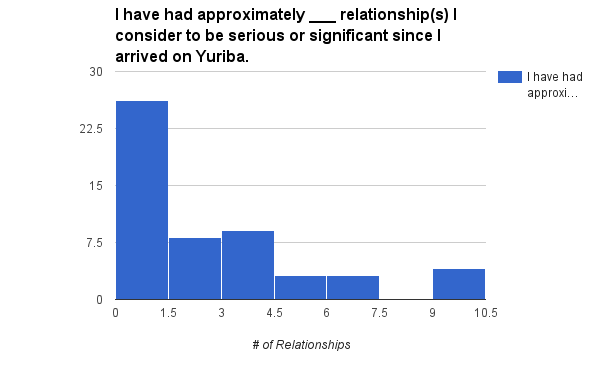 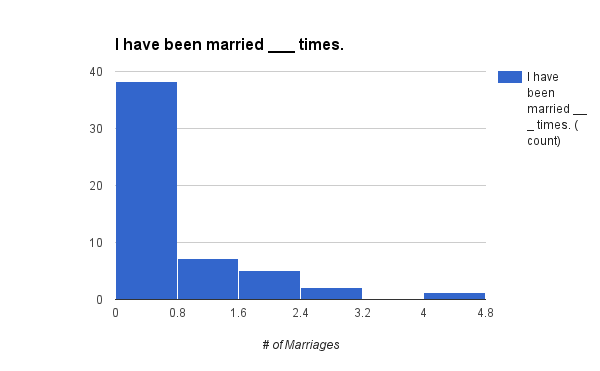 02.0% of Yuribans also mentioned that they were (or had been) widowed in 2005. In 2006, this was made a formal question; afterwards, between 4 and 15% report being widowed or having a serious partner pass away. Approximately 6-17% of Yuribans have been divorced.

Roughly 10-15% of Yuriban villagers have, or have had, children. In 2016, there was a notable spike, with 28.3% self-reporting as having or having had children. After 2006, further data was inquired of those individuals that did have children. Out of these, the majority have had a single child, although there have been a few larger families, or those who were rather prolific before coming to Yuriba. Most of the children were not born on Yuriba in early years, although by 2008 this trend had reversed.

Most had no relatives in Yuriba, although there are some exceptions. (40% in 2016 had, or previously have had, a biological or adopted relative living on the island.) In terms of biological family, respondents identified mothers, sisters, twins, grandmothers, second cousins, half-sisters, granddaughters, aunts, and cousins. Adopted family included mothers, daughter-in-laws, sisters (by far the most commonly claimed family relationship), brothers, aunts, nieces, step-mothers, sister-in-laws, nephews, step-daughters, step-fathers, and cousins. Some had other more... unique... species based relationships, such as 2011 and later's immigrant troll population.

The data on household demographics had to be discarded in 2005 as many appeared to be confused as to what the terms 'cohabitating' and 'roommates' meant, and many answers as to the size of the household were unclear.

From 2006 on, the question was made more specific to try and address this. While results are still somewhat dubious as to accuracy, we have done our best. 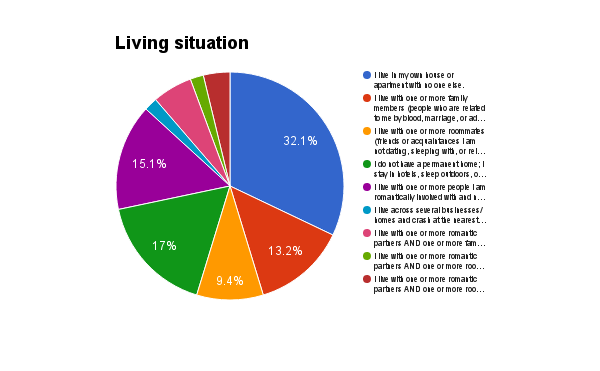 As of 2012, the N/A category included people who shifted between residences or lived in a place with an unstable population, as well as those who did not answer or were in an otherwise atypical situation. 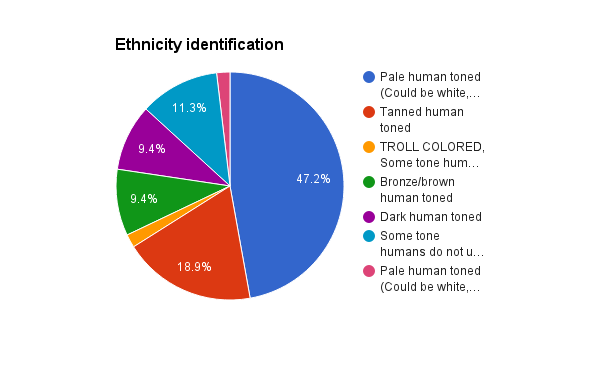 By and large, Yuriban citizens appear to fall within the Caucasian and Asian range of skin tones, with a few exceptions. 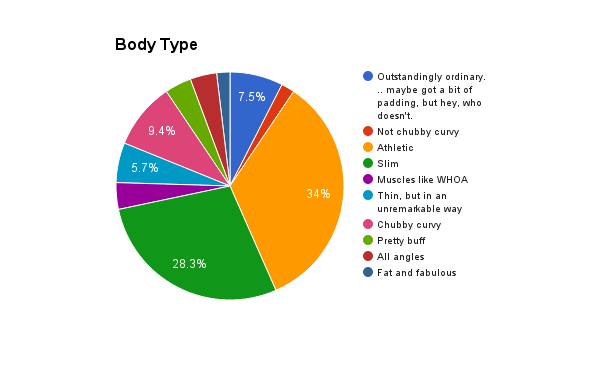 Overall, Yuribans seem to conform to typical modern body norms for attractiveness, with the majority identifying as being thin/slim or athletic. 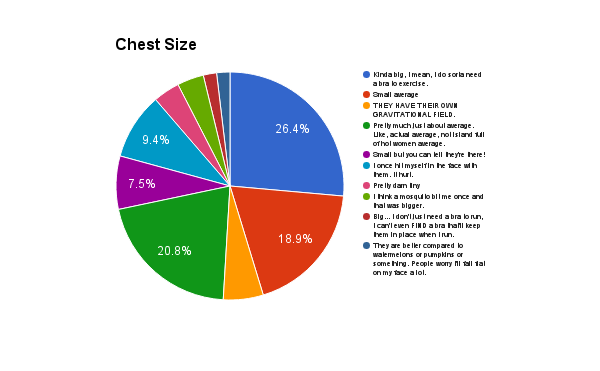 Out of Body Experiences

30% of Yuribans have had one of these.

Almost half (44.8%) of Yuribans play some form of musical instrument. The most popular choices include flute, clarinet, guitar, violin, and singing. 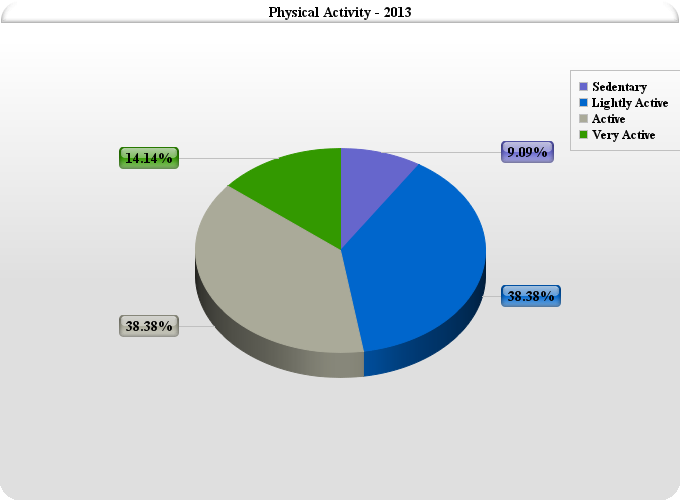 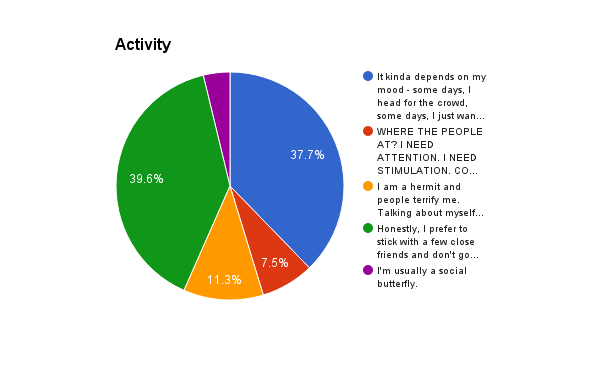 Greatest Fear of Meeting on a Dark Night 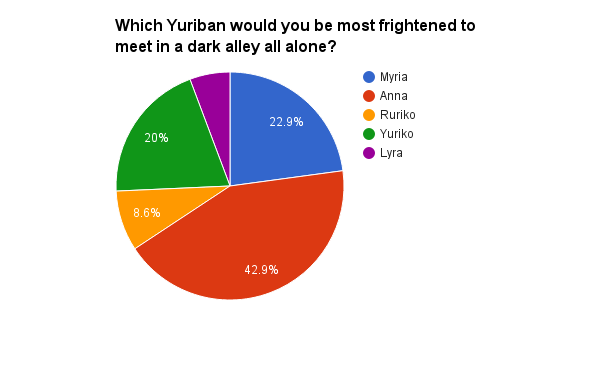