Whisper is a seven-tailed, arctic-hued kitsune hailing from the Underhill region of Yuriba. She is a reserved, almost emotionless figure known for her understated sense of mischief and her superhuman patience, as well as for being a Priestess of Fuyuzora and an extremely skilled healer. Though she has lived most of her life under the hill, she has recently emerged in the village itself to experience the life ushered in by the immigrants.

Living up to her name, Whisper is a quiet, soft-spoken woman. She tends to keep to herself a great deal and conducts herself with a touch of aloof dignity, yet she is not shy; she has no fear of other people, only a lack of things to say and a strong disinterest in filling the silence with meaningless conversation. Behind the silence she is an intelligent, philosophical woman who nevertheless shares the sense of mischief and inclinations towards crypticism inherent in most Yuriban kitsune. Her more mischievous attributes tend to be subtle and understated, but they are there. Her patience is effectively superhuman; she can wait a long time for things without so much as a batted eyelash. For the most part she keeps her emotions under control, almost to the point that she can appear boring and non-emotive. She places a high priority on self-restraint and inner serenity. That said, her emotions do show through sometimes. A smile from her carries a lot of weight because she doesn't share them often.

Though she is well into her middle years Whisper tends to be somewhat disparaging of her own wisdom. She believes that life is a continuous learning process and that, while she has learned a great deal in life, there is still much she does not fully understand.

She often enjoys long periods of introspective and can occasionally be found meditating, or more often eating by herself at the Four Seasons Cookhouse, contemplating over a hot dinner. Beyond that she is a talented dancer, though mostly in a ceremonial sense, and is skilled with a reed flute. She is an excellent seamstress and has created clothing for many people under the hill. In warmer months Whisper enjoys swimming or simply wading. She will visit hot springs during the cooler months but claims to find them uncomfortable during the spring and summer. Naturally her favourite time of year is winter, and while she is not necessarily eager to plunge into the bitterest of cold days, she also seems to have a strong cold tolerance and a certain comfort with ice and snowdrifts.

Like most natives, Whisper identifies as polyamorous, but does not actively look for relationships. If she does experience romantic impulses she does not typically act on them unless they're too strong to be ignored or pushed aside. Though romance has not been one of her highest priorities in many years, she has begun to experience something of a new outlook on life, leaving her more open to relationships than before. In most cases she does not have an interest in public displays of her affection and will only show her more passionate side behind closed doors where not just anyone can see her. 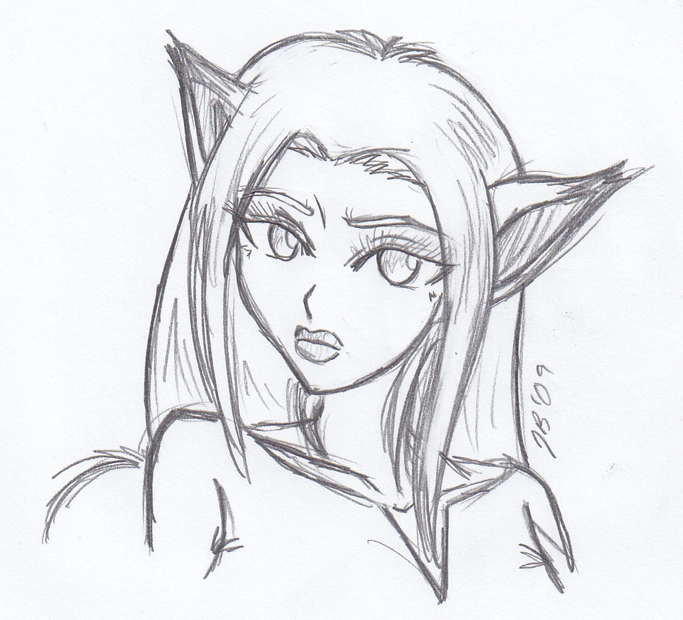 Whisper is involved in polyamorous relationships with both Rho Grey and Necahual, the latter of whom lives with her on Yuriba's southern shore. Her affair with Rho is somewhat fleeting given the woman's propensity for wandering away at random. When Rho does return she seems to evoke rare powerful emotions in Whisper, her eloquence seeming to disarm her reserve somehow. Necahual, meanwhile, spends much of her time asleep, but Whisper enjoys her insight and conversation when she's awake, and the two generally enjoy each other's closeness without the need for excessive intimacy. She has previously been romantically linked to Rosuto, though nothing came of it.

She counts Anna, Atara, breisleach, Caden Smith, Nessa, Rylia Wayas and Soled among her friends. Among her closest companions is Ahe'ssta, with whom she shares a close and generally dignified friendship. Her relations with most are polite if somewhat formalized, and it's difficult to say whether or not there's anyone she actively dislikes. By that same token it's often difficult to tell she likes someone given that she doesn't let a lot of emotion through.

Closer to home, she's mother to three girls in the range of 400 to 500 years old. The eldest, Gust, and the middle, Aine, are both half-dryad, while the youngest, Fubuki, is a full-blooded kitsune. She also has several granddaughters and even a few great-granddaughters; among her granddaughters is Gust's second-eldest, Aiva, an adventurous young woman who is mostly dryad.

Whisper has been a Priestess of Fuyuzora for about 400 years, having converted abruptly after a long time spent under the influence of Kikoutei's teachings. Since leaving Underhill the kitsune has seen her reputation in Yuriba's religious sphere rise somewhat, as she is effectively Fuyuzora's senior priestess in the village. She is traditionally entrusted with leading the annual First Snow ritual and has done so every year save its founding year, which came before she arrived on the island.

Whisper is one of Yuriba's most gifted healers. While she has access to extremely potent magical healing powers, she prefers to treat her patients with actual medicines when possible, feeling her magic is better used to heal only serious or supernatural cases. Accordingly she also works at the Yuriba Clinic as a doctor and can occasionally be seen by those pleading illness. Though she can apparently cure just about anything, her bedside manner is occasionally a little cool.

The priestess is reluctant to talk about her past. It is known that she was once a very close follower of Kikoutei, spending many years under the influence of the Henyanniichuan. In her younger years she was involved in a polyamorous marriage with an older kitsune, Siobhan, and a dryad woman, Ashe. They were together for about a century and a half, during which Whisper mothered three children with the pair, until both Siobhan and Ashe took ill with a deep sickness. Though she had practiced medicine and been born with healing powers, Whisper was unable to cure the illness, and her mates both passed away about four hundred years ago.

Traumatized by the deaths of her loved ones, Whisper went into seclusion. When she returned, she claimed a desire to better understand death and life, and she devoted herself to the study of Fuyuzora and Zokutou, becoming a priestess of the former. Her healing prowess increased dramatically over the years, the priestess dedicating herself to her studies. Though she has become an extremely powerful healer, she was not involved in a relationship for about four centuries after the deaths of her wives.

In 2007 by the outside calendar, Whisper left Underhill to experience what the village had to offer. She has kept a low profile since leaving Underhill, but in 2007 participated in the dance of the First Snow alongside Lyra Shade and Mirabelle O'Shea. She did not remain at the gathering afterward.

In the latter days of 2007 Whisper began seeing Rho more and more frequently, ultimately revealing her past to the red-haired skydiver. The relationship between the two seemed poised to move to a new level. As 2008 began she expanded her social horizons somewhat. She struck up a friendship with the fae woman Soled, and later with the avariel named Rosuto. She took to leaving her home more frequently and could be found dividing her time between walking outdoors, lingering at home, visiting either the Crimson Rose and Sword or the Four Seasons Cookhouse, and bathing in the hot spring at the Wild Hare Inn. The latter location fast became her favourite spot on the island. Though Rosuto vanished from the island just as their friendship seemed poised to advance, Whisper did not express outward signs of dismay at her departure, busying herself instead in her work at the Yuriba Clinic.

She presided over the First Snow in 2008 as well even as she continued her on-and-off relationship with Rho, who seemed distressingly intent on vanishing from the island for long periods. As 2009 began, though, she was tossed into the centre of a minor controversy when an ailing Kassy Talalupe was dragged into the Clinic, having severed her own ears while locked in the blessed form of an otter by Tanaku. After treating Talalupe's injuries and removing the locked blessing, Whisper promptly tore into Tanaku with a blistering rebuke. The incident seemed to spark flirtatious approaches from Anna, one of the group accompanying Talalupe to the clinic. The busty blonde pursued Whisper through the early part of the year, but the kitsune ultimately decided Anna was too different from her to make a suitable partner, halting the relationship at the friendship level.

More promising was her meeting with Necahual later in 2009. The couatl proved to be an intelligent presence for Whisper to converse with, and she took to spending much of her time with her, helping her adjust to the cooler Yuriban weather. Their relationship ultimately blossomed into a peculiarly passive romance built more on mutual fondness and intellectual curiosity than anything physical. Also that year she and Necahual encountered the mysterious Morrigan, and Whisper began trying to piece together an acquaintance with her through the couatl's telepathy.

She celebrated the First Snow again in 2009, then once more in 2010, though the latter was accompanied by a request from Akibimi's High Priestess, Moriko, that the event marking winter's coming be her last ritual before her death. The silver kitsune honoured Moriko's passing in private afterward.